Are you failing because you’re a perfectionist – and you’re stuck in the fear of your work not being good enough? 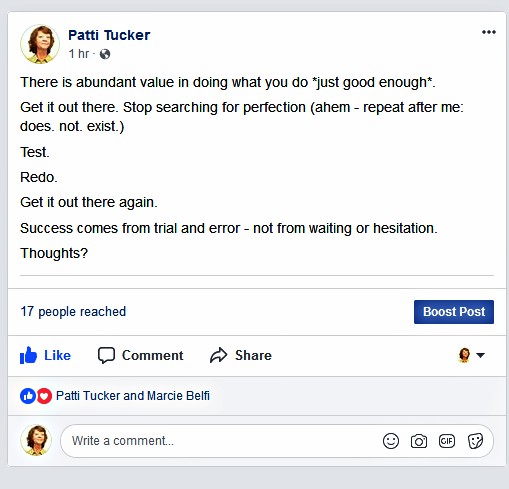 When you’re learning a new skill – maybe it’s baking or blogging or building sites – you will not come close to perfection with your many many many beginning attempts, as you figure your shit out.

That wisdom, that fact, Jack, applies across all areas in your life.

No one is born an expert.

You have to put in the time, the hours, the seemingly endless road trip of pit stops and course corrections in order to arrive where you’re confident that you know what you’re doing.

In the meantime, get your stuff out into the arena of your dreams and test its mettle.

Do just good enough at first.

Release it and watch.

Is it gaining traction, but not the response you desire?

Take out what sucks.

Make it MORE valuable to your market.

Maybe your next try is a hair above just good enough, but is still lacking, failing even.

Allowing your just good enough efforts to live and be seen in the space you want to occupy as an expert, will force you to grow in ways you couldn’t, WOULDN’T, if you refused to release what you know right now.

There will be fear.

There will be doubt.

The abundant value in just good enough is gonna surprise you, my friends.

Offer your just good enough and then tell me what happened.

I’ll be here waiting on ya.